Welcome to the second installment of real couples, real proposals!  This blog post is for you men and woman out there looking for proposal inspiration,

or a good (happy) cry.  Hope you enjoy these two proposal stories!

If you would like your special proposal featured on my blog, please email me at alex@alweddingswinnipeg.com with a mini write up of your love story, along with a photo.

“I was bugging Nick to get engaged for about the last six months, but I didn’t think by any chance we’d actually get engaged until about this coming spring. I was just being annoying.  He always told me that he thought Christmas time engagements were so “obvious” so he didn’t like them. But I love Christmas engagements! So I really really did not have a clue.

My friend Kayla is a photographer, and we’d been saying we’d do just a couples shoot one of these days and we never got around to doing it, so a few weeks  before New Years she casually said maybe we should do it New Years day because everyone’s off work. So we made that plan pretty loosey goosey, sure we’ll do it if it’s nice out and it all works, if not whatever. Little did I know, Nick and Kayla had it all set up from beginning to end and managed to make it seem completely casual. So on New Years day, we left to go meet Kayla at Assinaboine Forrest, argued all the way there about how to get there and by the time we did get there, me and Nick were basically not speaking! So we meet Kayla, and head out to take some pictures, listening to Kayla tell us how to pose “hand here, foot there, etc etc”. All the while Nick has this giant ring box stuffed in his sock and is trying to make sure I don’t see it. If you look in the photo’s you can see a big square sticking out of his ankle!

We took regular “cute couple pictures” for about half hour, then started walking a different direction and Kayla continued telling us how to stand, “face back to back” OK, Nick turn around, OK, Savanna turn around..” and I turned around and he was down on one knee! But of course, being me, I didn’t understand, I thought maybe Kayla had told him to kneel cause we were taking some sort of kneeling down photos…? So I knelt down too and said what the heck kinda photo is this? FINALLY I figured it out, he asked, and eventually after laugh/crying for ten minutes I said yes . I’d truly never been more shocked and surprised, I had NO clue it was happening. We have beautiful pictures of all of it happening (including me, kneeling down in the snow like a moron). It was the best surprise ever.” [Photos provided by couple] 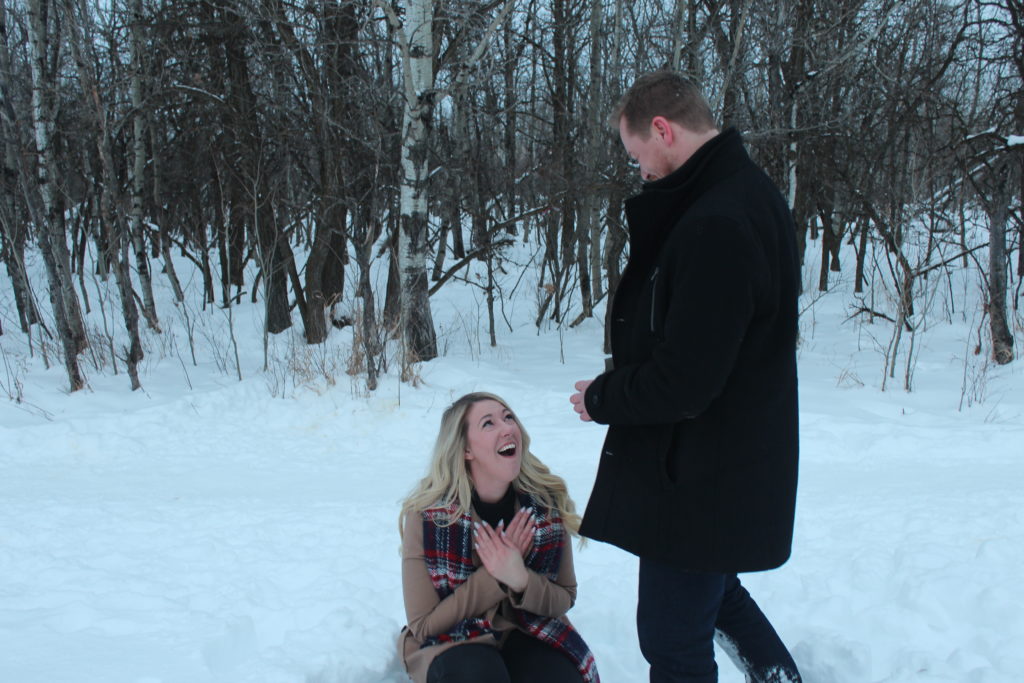 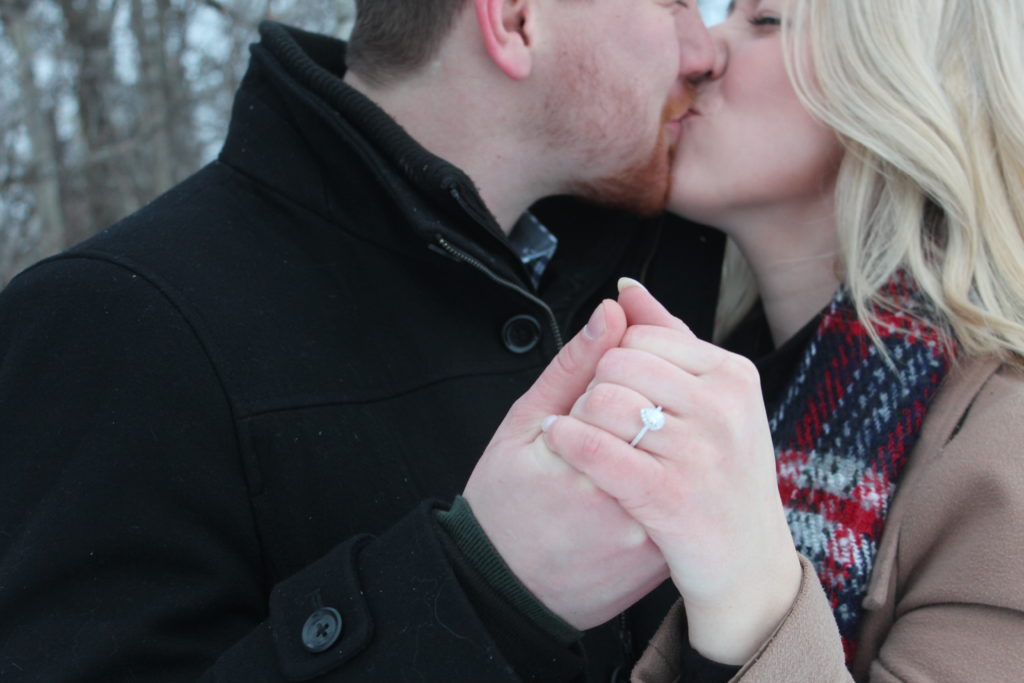 In November 2016, my fiancé surprised me with a plane ticket to Toronto to accompany him for a day of sightseeing in advance of a business conference he was to attend. This was my first trip to the city, and little did I know it would be the most memorable trip of my life. After an amazing sleep at the Fairmont Royal York on Friday night, we awoke early Saturday morning to take in the city.

After a full day of exploring downtown Toronto (including Eaton Centre and the Royal Ontario Museum), we got decked out for a nice dinner at Cluny Bistro in the historic Distillery District. My fiancé told me that it was a very fancy restaurant, so I dressed accordingly. However, he decided to wear red denim… a questionable choice for a fancy restaurant, but I didn’t say anything about his decision.

As Cluny Bistro is right along the main road of the Distillery District, we were also treated to the Toronto Christmas Market. This is an annual pop-up market which includes several historical fenced in blocks and numerous vendors selling seasonal products and gifts (as well as kiosks with hot chocolate, a Ferris wheel, carousel, live band and bars). The cobblestone streets and red brick buildings serve as the perfect backdrops for a Christmas market. After dinner, we had the chance to walk around and take in the sites. We eventually came across a large “love” marquee sign. My fiancé covertly asked if I would like to get a photo together. I needed a new Facebook profile picture, so of course, I said yes.

My fiancé suspiciously handed his phone off to someone in the market… This person happened to have two large cameras strapped to himself, this was odd, but I didn’t think much of it. As I started to position myself in front of the marquee sign, my fiancé turned me toward me. He said, “I hope you have had a wonderful trip.” I felt him reaching for his pocket, and get down on one knee. I was overtaken with joy that I could not look away from him. With over a hundred people clapping and cheering, all I could see was him. No words can express the happiness I felt at that moment. The love of my life wanted to spend the rest of our lives together.

The man who took our photo came up to us, I initially thought to return my fiance’s phone. As it turned out, my fiancé pulled out all the stops and had hired him, a professional photographer, to capture our proposal and take photos of us for the evening. My fiancé had never met the photographer before, and my fiancé told him to look for the guy matching is description wearing red denim. Now the red denim and two large cameras made sense!

That night we celebrated our engagement with two close friends in Toronto. Wandering around Queen West in the wee hours of the morning, we caught the first snowfall of the year. It was the perfect way to spend our engagement!

Now onto planning the rest of our lives together!