Welcome to the third and FINAL installment of real couples, real proposals!  This blog post is for you men and woman out there looking for proposal inspiration,

or a good (happy) cry.  This week’s installment is extra special, as I’m featuring a he said, she said of a proposal.  This gives you a cool look into the thoughts going through their minds leading up to the proposal.

He Said / She Said Proposal

“Stephen has always been a bit of an open book to me and so the summer of 2015, I knew something was “up”. It was also the summer my sister was getting married. Stephen of course was invited to the wedding and would meet my whole extended family for the first time that year (we are quite dispersed throughout the world) and both of us were feeling it a bit inadequate to just introduce him as my “boyfriend” when we had already been together for 4 years and knew we wanted to be together forever. Unbeknownst to me, when he got back from medical school in Ireland that summer, the first week back he invited my parents out for a walk in Assiniboine park to ask their permission to ask me to marry him.

Four weeks later, Stephen decided to surprise me with a dinner. I was immediately suspicious, but Stephen just said it was a dinner but refused to tell me where it would be, so I let it go and decided that it was probably just a dinner and not to get my hopes up. The other important thing was that Stephen knows I love to document special occasions, trips, and nights out, so I always take tons of pictures. He also knew that I would hate to look bad when he proposed to me, or to be dressed down. So the same night of that surprise dinner, I was going for a makeup trial for my sisters wedding (not a coincidence! Stephen made sure he was going to propose to me that night so I would look my best in the pictures!). So by the time we got to the restaurant, I was wearing a dress, heels, and had had my full makeup done.

We were seated in a relatively empty section (which I thought odd for a Thursday night) and Stephen proceeded to be quite nervous and fidgeting with his jacket (which was a weird item to have in July on a 27 degree day, now that I look back on it). Before I knew it, Stephen was telling me how much I meant to him and how he felt and all of a sudden he was on one knee with a beautiful ring in his hand and I was VERY surprised. Even though I thought I would know when it was coming, he managed to completely throw me off. The whole restaurant applauded, we were both shaking and laughing and we had champagne brought out to us right away (pre-arranged, of course). It was a bit of a traditional and perhaps not out of the box proposal, but it was a total surprise to me, even though I thought I would know when it was coming.  I guess, the moral of the story is, Stephen, through his deep understanding of me found a way to make it a surprise, made sure I would look the way I wanted to on that day, included my family and bought me the most beautiful ring that suited me in particular. And we looked great in the pictures!” [Photo provided by couple]

“For her engagement ring Anna had wanted something different. She always looked at different ring designs. When she came across the black diamond concept she loved it (she always said she hated yellow gold and yellow diamonds). She had hinted strongly that she loved the princess cut style. Once I had a basic idea of what she was looking for, I realized that jewellers would most likely not have the ring I wanted to give Anna in stock, so I went to Vandeburg jewellers since they make custom rings. I wanted The black diamond to be show cased, so I picked a princess cut with bold lines, with a ring of white diamonds and 6 white diamonds in the band. This was the final design. I went back and forth with adding some smaller black diamonds in the ring, but as I mentioned before, they detracted from the main diamond. when I first saw the final product, the black diamond really popped so I was I knew it was perfect!

On the night I was going to propose, I couldn’t even think straight. I was shaking and nervous and couldn’t focus. A lot of guys say they already know what the answer will be then ask, but part of me was terrified for a “what if she says no” scenario. I had called ahead to make a reservation, so the restaurant knew why were coming; they put us in the corner and ensured the tables around us were empty. I can’t remember exactly what led to what, but at one point Anna had said that she was a bit disappointed, not in anything important, but something had happened. I said “I think I can make your night better” Then I got down on one knee and asked. She said yes and I almost dropped the ring putting it on he finger because I was shaking so much. I kissed her after and then we started calling all of our friends and family.

The rest is history!” [Photo provided by couple] 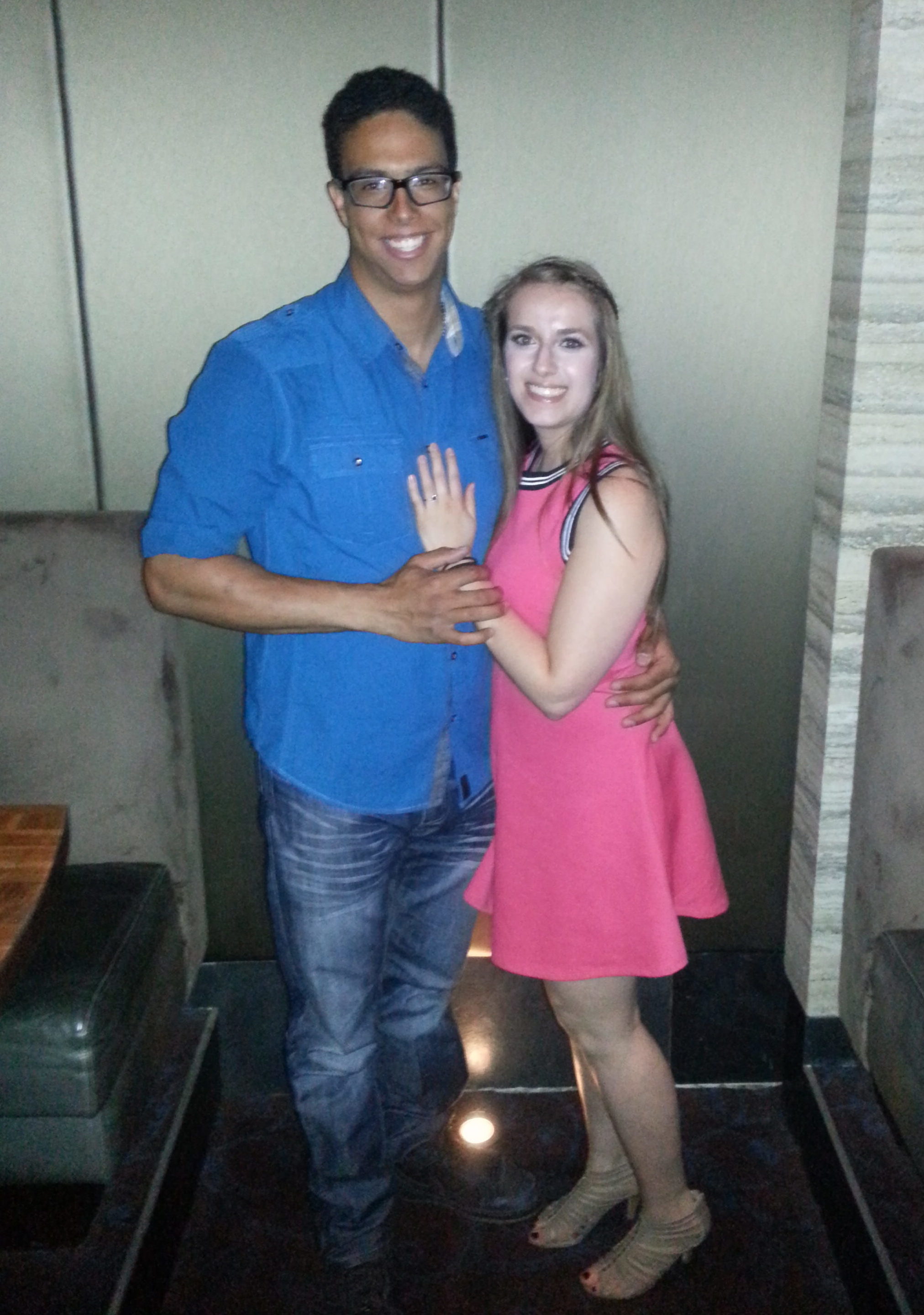